This is part 10 of the series about: How to build a Constraint Programming solver?

In this post I'll first make a small update to the sum constraint as it should simplify things like 2x+3x to 5x and also 2x-3y+5 == z by moving the 5 to the rhs and the z to the left.

In the second part of this post we create the not equal constraint and use it for graph coloring as I'm missing some visualizations in this series.

This time I want to do test driven development that means we define the tests first.

It's important that we test for + and - and single variables as well as LinearVariables and a bit more on the rhs.

then we can run ] test ConstraintSolver

That is part of the second constraint as the first one can actually be solved currently but is not converted to a simplified form.

to the test case which fails.

Now we can simplify it because we have the same variable index inside the constraint indices or linear variables indices.

At which step do we want to simplify?

We could simplify in + when we build the linear variables object or in == when we actually construct the constraint. I'm going for the latter one as this has overhead only once.

The idea is to sort the indices and if two indices are the same then we add up the coefficients.

This will be done in src/eq_sum.jl but we want to do it later also for <= and >= therefore the function of simplification will be in src/linearcombination.jl.

First we check whether the indices are all unique. If yes => don't need to do anything.

Now we need to support +(::ConstraintSolver.LinearVariables, ::Int64) I'll do this by using 0 as the index for numbers and the number itself is the coefficient.

and now the actual function. Now it looks reasonable to change the simplify function a little bit by also returning a constant left hand side. So whenever there is a 0 in indices it is actually a constant value and we want to move it to the right later.

The first part which is used when an index isn't used more than once gets changed to:

and the end of the function:

In the normal == we now have to subtract lhs from y:

That was simple. What are we missing?

Okay that is the same as plus.

Let's create a new branch and push it to see whether we have a test for everything we coded. It might be the case that I forgot a test case and also some coding but with codecov we can at least see whether there is a test missing which we actually coded.

I called it feature-combined-sums and as I actually have an issue #15 for it we should put #15 in our commit message such that it gets linked.

Pushing and creating a pull request:

Okay after a while I decided that Travis is sometimes just too slow for me and GitHub Actions seems to be faster. So I included codecov into GitHub Actions and removed travis:

you get the CODECOV_TOKEN in the settings of codecov and then need to add it to the secret keys of your GitHub project.

Oh everything went fine and we have 100% diff coverage.

What do we want to do?

We want to color the US states in such a way that two states don't have the same color. As it is a map we know that we need at most 4 colors. That means we can have 49 (I removed Alaska and Hawaii but D.C. is included) variables each with the possibilities 1,2,3 and 4. We just have to create the not equal constraint.

Why only four colors?

In that video Dr. James Grime gives a good idea about why four colors are enough without giving the full prove but I think the idea is very valuable.

In the upcoming posts I will introduce the option to get all solutions which might be interesting for Sudoku for example if people want to create a sudoku instead of solving it by generating some numbers and check whether that is sufficient to make it unique. I'll also add the functionality to optimize i.e the maximum color should be minimized. That is a bit more complicated I think but we'll get there.

First of all let us solve the simplest version of graph coloring using this map.

after we introduced all the variables we need like:

Implementing the != constraint. One might think we can use the same technique as before by introducing:

in src/not_equal.jl (new file). Unfortunately this doesn't work because the != doesn't work as it is interpreted as !(x == y). Therefore we have to use something like this:

So we create the equal constraint first and then we change it to a not equal one.

We of course create a

function as well were we have our basics at the top:

and then as we always have exactly two variables we write.

that checks whether exactly one of the variables is set. If that is not the case we can return as it's either infeasible or we can't reduce the search space.

If one is fixed we can remove the value from the other one if it has the value:

and the third part of src/not_equal.jl is again to check whether it's feasible if we set a value in backtracking. 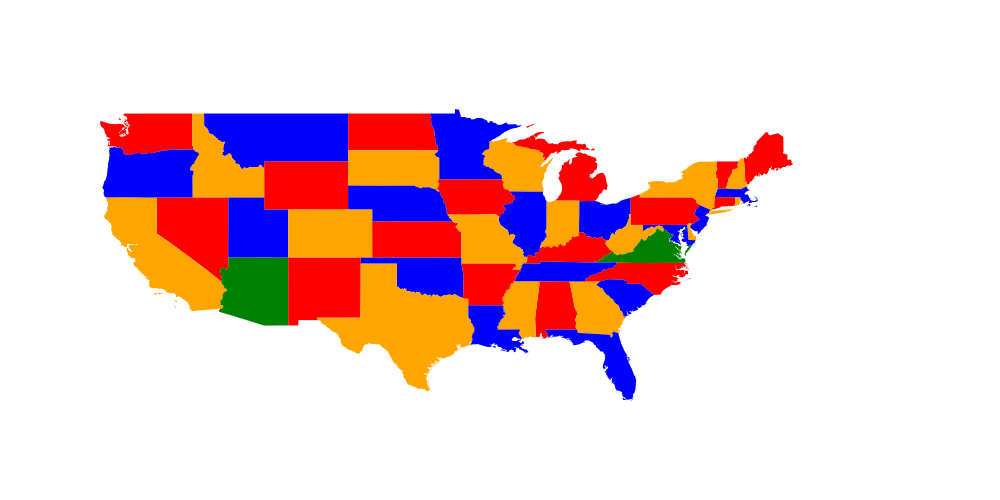 But it's probably not that interesting to see the end result. We would like to visualize how the solver found it out.

Not sure how to visualize it such that one can see the current search space :/ What I can show you for now is the value currently fixed which might get changed in backtracking. (Here it isn't)

The reason why there is no change sometimes is when pruning a value but I find it interesting to get an idea of how many pruning steps there are before the next fix.

In general we can see that we used a lot of free choices and didn't prune often.

I think it might be more interesting to see what happens if we limit the number of colors to 3.

There one can see a problem of using my strategy of setting a variable which was infeasible most often before in backtracking even though it works quite nicely in sudoku. Another thing is: If we set Washington to red and it doesn't work then setting it to blue doesn't work as well because we could always swap colors in the whole map i.e all which were blue are now red and vice versa. That doesn't change any constraint.

Thanks for reading and special thanks to my first three patrons!

For a donation of a single dollar per month you get early access to the posts. Try it out for a the last two weeks of October for free and if you don't enjoy it just cancel your subscription.