This is part 6 of the series about: How to build a Constraint Programming solver?

We talked a while about one special constraint type: alldifferent and there especially about sudokus.

Let's get into the next constraint type in this blog and also a small change in backtracking.

First about backtracking. At the moment we use recursion and it's kind of the obvious choice for it but it has its limitations regarding recursion limit and I normally don't find it easy to debug.

The first part of this post is how to change it in a way that we don't use recursion anymore.

There are some ways of doing this:

The first one has the obvious disadvantage that we have to save everything but it's easy to do everything for example not only Depth-First-Search (DFS).

I use the second option in Juniper.jl as we normally use Best-First-Search (BFS) there and we don't need to store the tree structure. In that case the information of each node is quite small. Only the bounds of each variable so we split a node into two branches like x <= 2 and x > 2. There is no constraint propagation in the sense as we have it here.

In this project we would basically need to save the whole search space for each node which is too much I think.

Therefore I choose option 3. This limits us to DFS which is fine as long as we only deal with satisfiable problems I think.

Okay so how do we do it?

I created a backtrack object which defines what we have done in that particular node or to be more precise any information we need to remove if we need to backtrack:

Remember: pruned in ConstraintOutput is just a vector of numbers which show how many values we removed from a variable.

If we call backtrack! we have:

so simple fill the object and at the moment we didn't prune anything so we leave constraint_idx and pruned empty.

We've set pval_idx to 0 before so we increase it by one here and we will use ind to refer to the index of the variable as we did before. Now there might be something we pruned before and need to revert now (not in the first call of the while loop)

Now we check whether we tested all possible values already:

That means that we need to also reset our last_ptr and first_ptr for that variable back to what it was before and remove the backtrack object from our list.

At the end of our while loop we had:

So we called the function again got something back and if we solved the problem we can return and otherwise we need to reverse prune.

Now we reverse prune at the very beginning but we need to initiate a new function call kind of (without actually calling the function):

We simply get our next index and then we fill our new object as I didn't want to save the complete ConstraintOutput in each node only the stuff we actually need to backtrack. This gets saved in the current backtrack object.

At the end we create and push our new backtrack object which uses the new ind we got from get_weak_ind.

After the while loop we had:

now we only need:

As we use a backtrack object now we need a new reverse_pruning function.

We have two reverse_pruning! functions as we still use the old one if we find out during our pruning process that it's not feasible anymore.

That's basically it for backtracking. There is no real change in performance. I've checked. It's maybe a small bit faster than before.

Now to the sum constraint. It's always nice to solve a puzzle with a new constraint as it's otherwise quite boring I think. Let's not get too far away from sudoku: 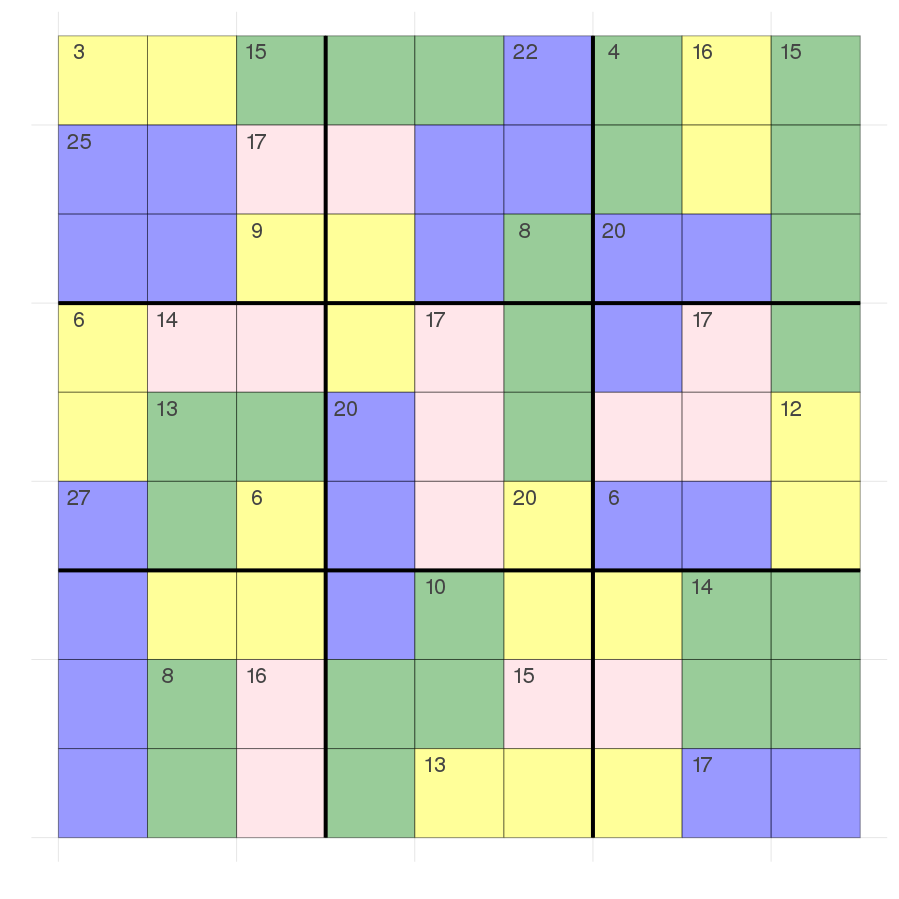 That is the killer sudoku shown on the Wikipedia page.

It is a 9x9 grid as well which itself consists of 9 3x3 grids. The rules are the same as sudoku plus one extra rule.

There are extra regions here marked in color which have a number in the upper left corner of that region.

Edit 02.10.2019: The region is called cage and I just found out that each cage has a all different constraint as well. I don't use that here as I didn't read it :/ but it's also reasonable for the solver and this and the following post, that we concentrate on the sum constraint.

This number shows the sum in that region i.e in the upper left of the grid there is a 3 so that the sum of those two yellow cells must be 3. Therefore it can be either 1,2 or 2,1. This for example fixes the number in the second row and 7th colum (below the 4) to a 3 as in that region the numbers can be only 1,3 or 3,1 as we also have the alldifferent constraint from sudoku and the first row already has a 1.

So we now have a right hand side (rhs) in our add_constraint! function and we need of course a rhs in our Constraint struct.

we create a eq_sum.jl file and include it.

and in add_constraint! we have:

and rhs=0 as the default for our function.

I hope you remember that we have two all_different functions. One is used to check whether setting a value inside backtracking is feasible and the other main one tries to prune values.

In the former one we also need the index for where we want to set the value in eq_sum and it kind of makes sense anyway so I changed:

Now the function itself gets all indices as it gets the constraint now and also the index where the value is set.

The first thing I want to do is to define an empty eq_sum prune function which doesn't prune anything and always returns it's feasible.

which means I want to work completely with backtracking here.

Now lets check for feasibility in our second function:

We check the current sum csum and then compute the maximum value we can get by all the empty cells as well as the minimum value.

At the beginning we check only if every number is fixed and if yes we add val to the current sum and check if it matches the rhs.

Before we use max_extra and min_extra let us define .max and .min of a variable first.

The rm! function changes to:

Here it's a parameter to compute it or not as I add a function for remove_below and remove_above later which can compute it in the end once.

now back to our feasibility eq_sum function:

Which means if we add our new value val to the current sum csum ,and then we need to add at least min_extra later, the sum is bigger than our rhs => It's not feasible the same is true if we add max_extra and it's still too low.

If we now run solve! we have to wait for a long time. (Actually I always killed it after 1 or 2 minutes I think).

To the prune function of eq_sum:

First we will get a list of minimum and maximum values

and we have this values twice as we will change maxs and mins and want to compare later whether we changed something.

Let's have a look at a small example to explain the next step:

The structure is [min_val max_val] so we have 3 variables with different ranges and they should add up to 7.

For each variable we will do the following:

Now we can simplify the left hand side as

The simplify thing needs to be only once where we compute the total maximum over all variables (minus the right hand side) and then we can just subtract the maximum of the current variable to get the same result.

In the above case we would compute

and then subtract 5 from it to get the -1 we had before.

and then I do the update step where I check what changed and then remove the values from the search space and set pruned and changed accordingly:

Edit: I found that this is not very good explained and also not implemented as I imagined it in my brain :/ I'm sorry about that. Unfortunately it happens when blogging while coding. There is an update to that part in Part 8: UI refactoring and bugfix of sum constraint

Here I only compute var.min as var.max didn't change. It might be the case that we remove everything such that no value is possible. Then we want to return ConstraintOutput(false, changed, pruned).

The feasible function is simple:

Let's have a look at the performance:

This includes creating the model and I would say that it doesn't look too bad.

Btw this is the solved killer sudoku 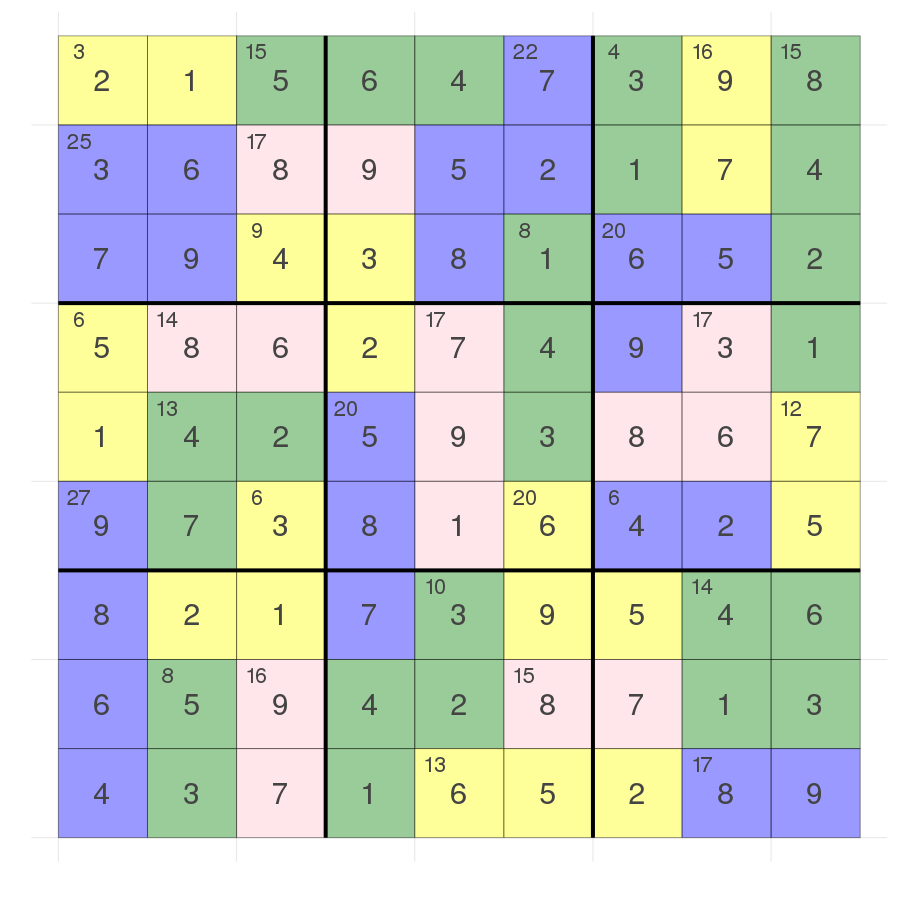 Now there should be some kind of benchmarking:

Unfortunately I wasn't able to find a list of killer sudokus which I could use. For now I converted the image of some website of a killer sudoku into my data structure and that is quite cumbersome but I looked for a hard killer sudoku (whatever that actually means as I never did them myself) 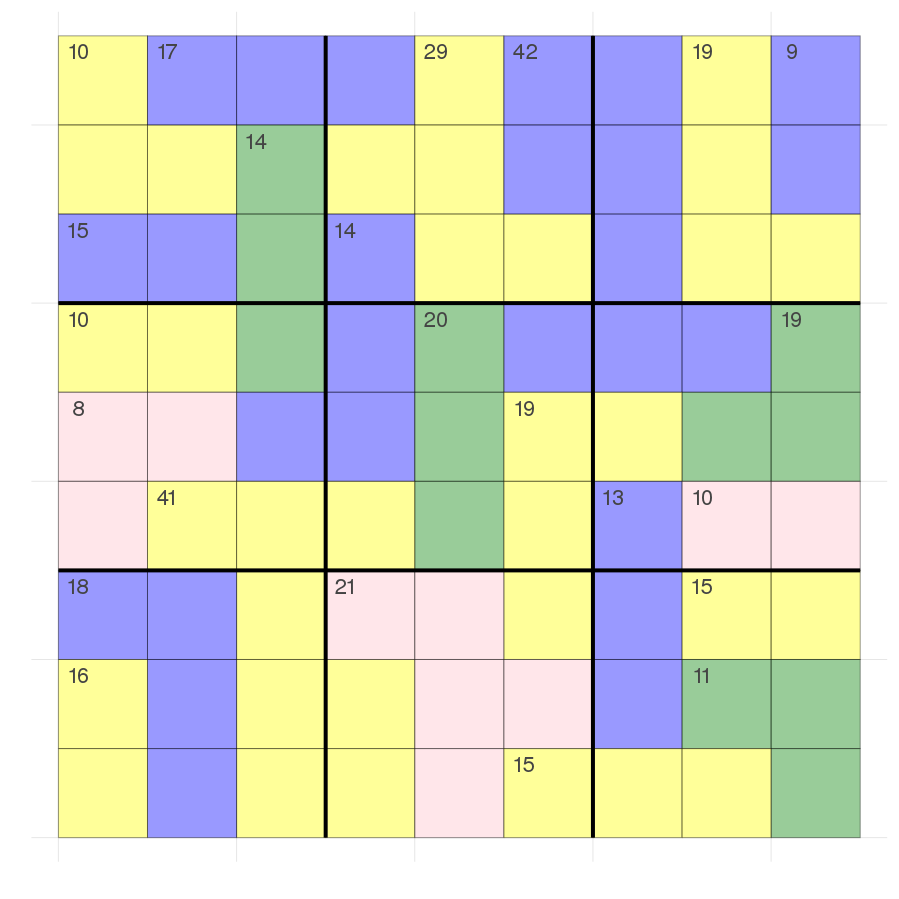 I would say there are fewer regions so that makes it harder at first glance. Let's try:

It took more than 30s on my machine which is too long in my opinion.

Which is huge! Over 4 million function calls inside backtracking. That's just too much.

I of course forgot:

whenever it's infeasible but that doesn't change much.

Let's have a look at how to make it faster in the next post but give an outlook here: 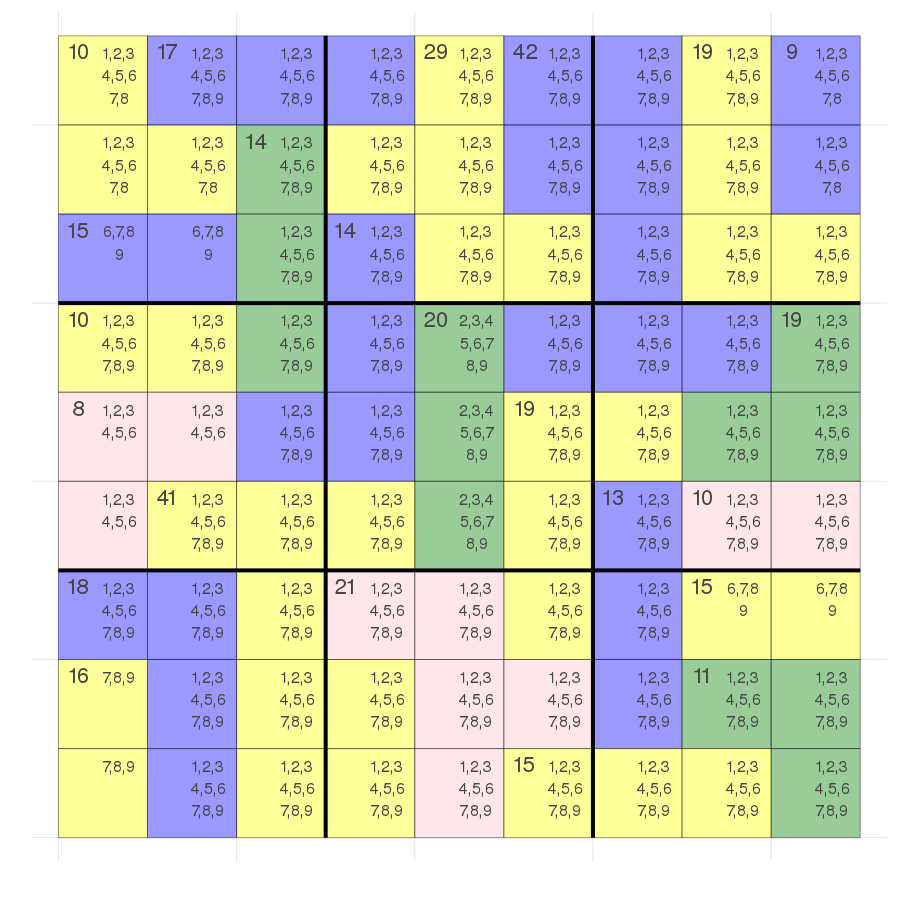 The problem I see is visible in the bottom left yellow region. There is no way to have an 8 there but the sum constraint doesn't know that as it has no idea of the all_different constraint.

In general the maximum and minimum we assume can't be achieved as we most often have the all different constraint i.e in the pink region in the fourth block (with the sum=8) it's not possible to have a 6 there as this would mean the other two cells needed to be a 1 which isn't allowed.

That means we have to link these constraints together. We'll need some kind of a lookup to check which indices share another constraint to prune more values.

A lot to think about... and we don't want to make it special to killer sudoku of course. Give me some time and maybe send me ideas ;)

Should the variable check whether it's feasible to set it? So whenever a variable is fixed it might should call fulfills_constraints itself and return whether it's successful as I think the person who implements constraints shouldn't handle that this directly.

Thanks for reading and special thanks to my first two patrons!

Check out my update: