How to profile julia code?

This is kind of part 13 of the series about: How to build a Constraint Programming solver? But it is also interesting for you if you don't care about constraint programming. It's just about: How to make your code faster.

Anyway these are the other posts so far in the ongoing series:

In the last post the benchmark looked good for classic sudokus but not so much for killer sudokus and okayish for graph coloring I would say. As always one can try to improve the performance by rethinking the code but today I mostly want to share how one can check which parts of the code are slow and maybe improve on that i.e by reducing the memory consumption.

First step in improving the performance is always to know what is slow at the moment. We don't want to take hours in improving one line of code which is only responsible for 1% of the code run time.

An important step is to reduce the memory used.

Let's find out how much memory we use in the the normal sudoku case at first because we call less functions there:

quite a normal setup. The first main() call is for compiling and checking that we solve every sudoku. The @time macro gives us the time but also the memory usage.

Attention: This includes all kind of timing not just the solve and is run on my Laptop so don't compare that to the benchmark results from last time.

We use ~500MiB of memory for solving 95 sudokus. Aha and now? Yeah that doesn't give us much detail. Therefore we make memory measurements per line now. Close the current session first.

In the file explorer of your IDE you can now see a couple of *.mem files. I suppose the most memory is used in the constraint all_different.jl

i.e at the bottom of the file you see:

The function itself checks whether we can set value at index or whether that isn't possible (violates the constraint).

We do a filtering step first here which is creates a new array in the first line and for the second line we again create an array and fill it with true or false and then iterate over it to check if any of them is true. This is a short form but quite wasteful.

It can be replaced by:

We don't have any memory consumption afterwards.

In general it is a good idea to avoid dictionaries if possible. Here the keys are the possible values and the values is a mapping which in used in the backwards direction as well: vertex_mapping_bw.

Normally our variables will have a range like 1:9 so we could directly replace it by a vector but we also have -9:-1 for example.

and then for accessing the value:

Additionally I realized that we don't use CartesianIndex anymore so we don't need the Union part in vertex_mapping_bw.

In general one goes along those *.mem files and checks whether the memory can be reduced. It is probably quite specific for each program how this can be done but now you know how to measure it.

How about run time profiling instead of memory?

This is harder I would say both technically and therefore also for us. In general the execution gets interrupted for this process and the stack gets analysed to obtain the necessary information but I don't want to explain that in too much detail here as I don't know too much about it and I don't think it's too important. (A bit knowledge is good though.)

There is the standard julia profiler which produces output like this:

You can read more about it in the official documentation but I'm not a huge fan of that. It's hard to read and feels more like a format for computers than for human beings.

The second option is to use the Juno profiler which is integrated into Juno the julia extension for the Atom editor.

but sometimes it is not enough output for me and one might be able to change that but changing the interrupt frequency.

I asked in the Julia slack community and got referred to the PProf.jl package which I want to explain a little bit more here.

It takes the computer readable format from above and visualizes it in different ways. More specific: PProf is the new format it gets converted to and there are tools which visualize that. It is also used for other programming languages. Most content I found was for the programming language Go.

After installing it with ] add PProf and graphviz you can run:

run julia> Profile.clear() if you want to profile something else afterwards.

Then you can click on the link to localhost:58599 and get:

I don't know about you but I don't get too much information out of it. The arrows a -> b are a calls b and the numbers provide run time information. (In Go this is actual timing in ms, s) here it is the number of operations as far as I understand it. 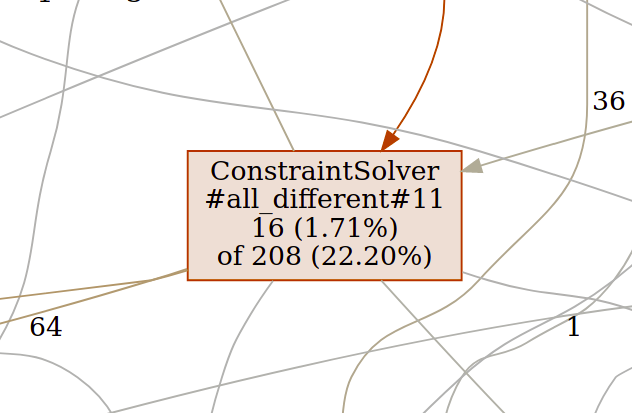 The all_different function is accountable for 22% of the all run time but only 1.7% itself meaning it calls functions which are actually consuming the time i.e the bipartite_matching function and strong_components_map.

But there are other visual representations which I find more useful.

Attention These screenshots are from the current master branch and not after the memory improvements.

You can change the representation with View-> next up is Flame Graph. 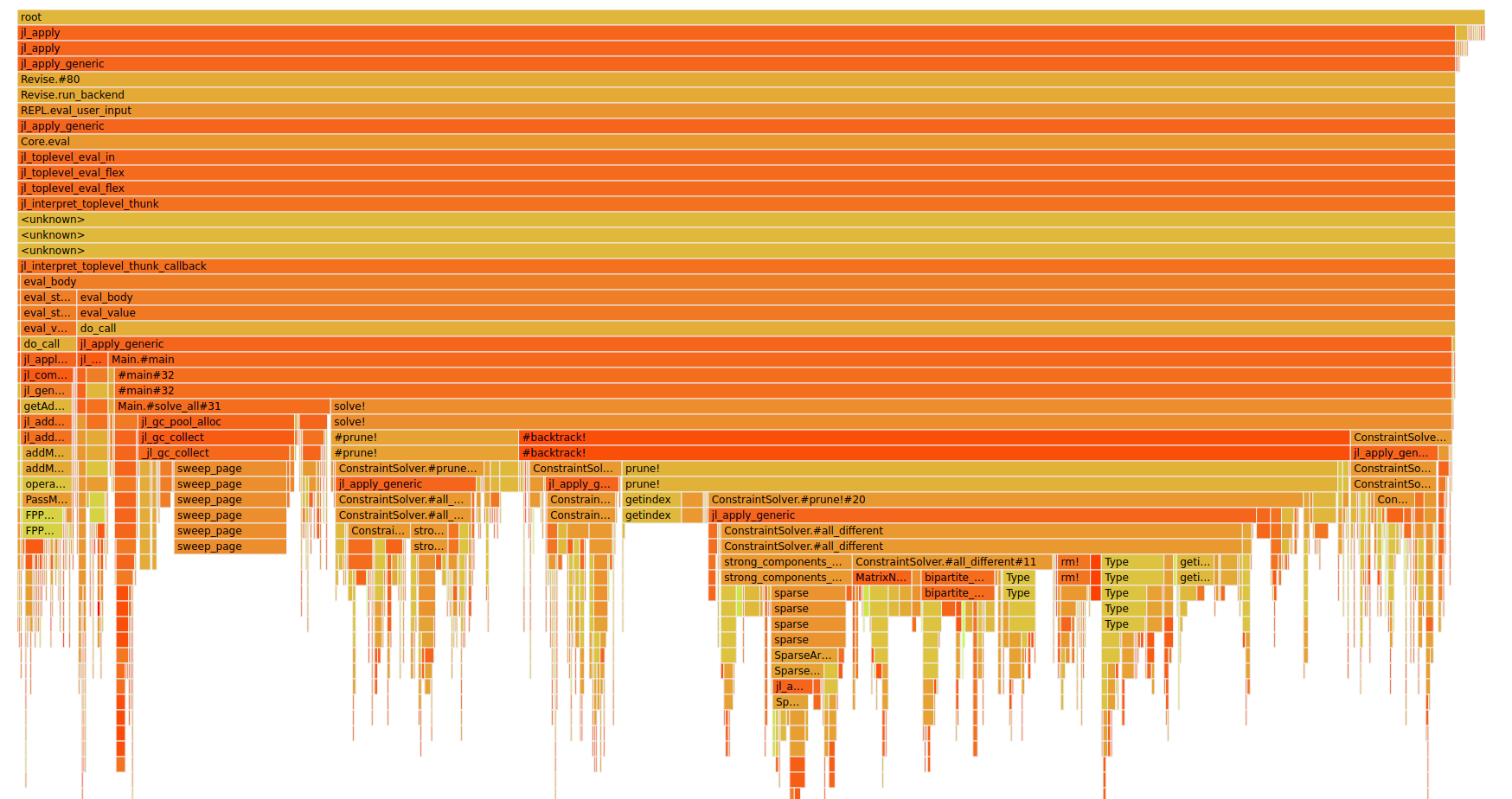 Some important things about flame graphs:

We are only interested in the solve part as we currently still look at solving 95 sudokus. We could reduce that to solving only 1 but I think we get a better view this way as we have more data.

Clicking on the solve! block gives us:

If you hover over solve! you can see that it takes 76% of the complete run time. One can clearly see that the all_different constraint takes the most time (I mean the one under prune!).

Backtrack used 57% of the whole time so 75% of solve! and prune! takes a bit less than 86% of the whole backtrack! time as we also have some all_different calls before prune!.

It is quite obvious that there are three big components:

As mentioned before this is before our memory improvements. Let's have a look at after:

You can see that it removed some of the Type blocks and reduced others.

Now there is one problem with the bipartite_matching calls: Normally I would say if you call another library it's the job of someone else :D in this case the library actually solves a harder problem which I didn't realize that much before.

Our goal is to find a maximum cardinality matching which means we want to find a matching between variables and values such that all variables get exactly one value. If this can't be achieved it is infeasible. The library uses also weights of the edges and tries to find the maximum sum of the edges inside the matching. I've set the weights to 1 and thought: Well that solves my problem but the runtime is worse and it uses more memory.

Therefore in the next post I'll implement a maximum cardinality matching algorithm and make a PR for that in the MatrixNetworks.jl package.

I've mentioned that I think the order of calling the constraints might be important. The current approach was to just call them one by one. Level by level to be more precise so all that changed and then all that changed because the ones before changed something and so on until no further pruning was possible.

I'll show you some new benchmarking results in the next post.

The main reason why I didn't blog last week was because of a weird bug I wasn't able to find. The constraint solver wasn't deterministic anymore and that is a huge deal because if it isn't it's harder to debug and if someone finds an error which only occurs every fifth time it's just bad and unpredictable. Even worse is if you think it should be deterministic than there is probably a real bug.

I've also added some test cases for this by logging the trace and comparing it for two different runs of the same problem.

As of now the Kaggle challenge Santa 2019 didn't start yet. Once it does I'll have a look at it and blog about it as soon as possible. Explaining the problem first and some ideas probably and work on it the next weeks then and keep you posted as this time I'll not go for winning a medal but instead gaining some followers for the blog from the Kaggle community ;)

There are some things missing:

Thanks for reading and special thanks to three patrons!

Currently I get 9$ per Month using Patreon and PayPal when I reach my next goal of 50$ per month I'll create a faster blog which will also have a better layout:

If you want to support me and this blog please consider a donation via Patreon or via GitHub to keep this project running.

For a donation of a single dollar per month you get early access to the posts. Try it out for the last two weeks of October for free and if you don't enjoy it just cancel your subscription.