A quick blog post about another animation idea I had for a long time. Again inspired by others like Edmund Harris, Numberphile and The Coding Train.

In this post I want to walk through animations that can be done regarding the Collatz conjecture. It is more for visual appeal than to give any hints of solving the hard problem but maybe some of you has ideas on top of it that can be used to get a better feeling for the problem.

What is the Collatz conjecture?

the conjecture says that for every \(n\) you apply the function to in sequence the number will end up in a cycle 4,2,1. So you apply the above function \(f\) to the number \(n\) first and then apply it to the resulting number and so on.

That is the big question.

Implementation of the sequence

Before we do any animation we might want to get just implement the function itself and we're probably interested in the sequence taken. 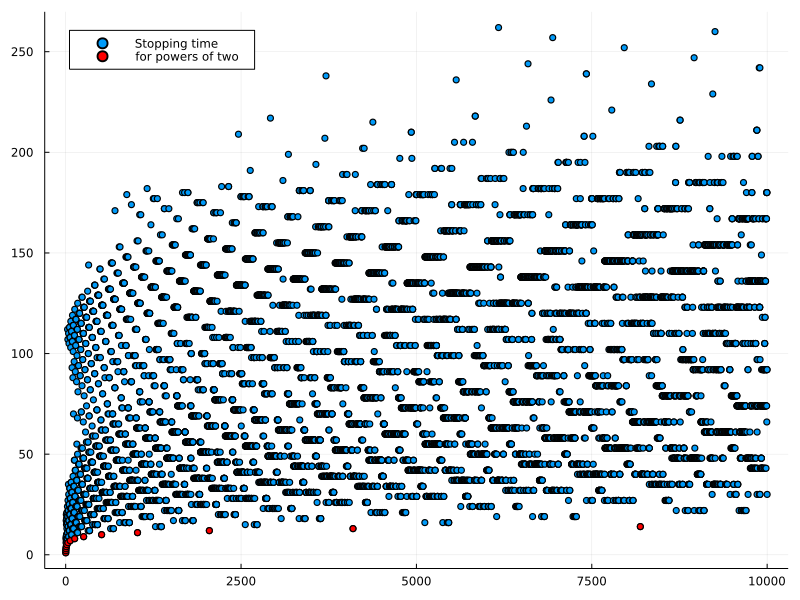 Or maybe a histogram of the number of steps? 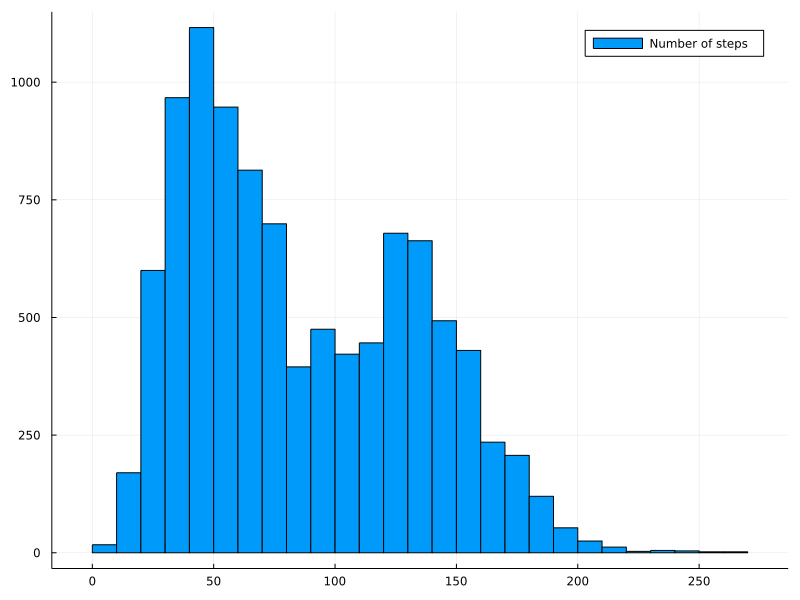 Starting again with the basics:

Actually I used translate in the ground function here to start nearly at the bottom of the canvas and more to the left. You'll see why later.

First of all: The idea of the drawing was developed by Edmund Harris and this is just one of many implementations. Full credit to him 😉

The paths of all the number sequences can be combined in a tree. For example:

Here both have the same sequence after 862. So we could save all sequences in a big tree structure where a node represents a number and is connected to the parent to the number it results in when applying collatz_next once and the children are are the numbers it could have come from.

Detour creation of a tree

Sorry for the small detour. Before we continue with the animation let's have a look at a more standard and not so visually appealing representation of the tree.

This time you can just read through the code here.

It basically creates the tree starting from the root 1 and either multiplies it by 2 or subtract 1 and divide by 3 (under certain conditions). Then I used GraphMakie to plot the tree and did some stuff to make the edges longer (multiplying the y part of the layouted point by some number) and aligned the labels a bit. 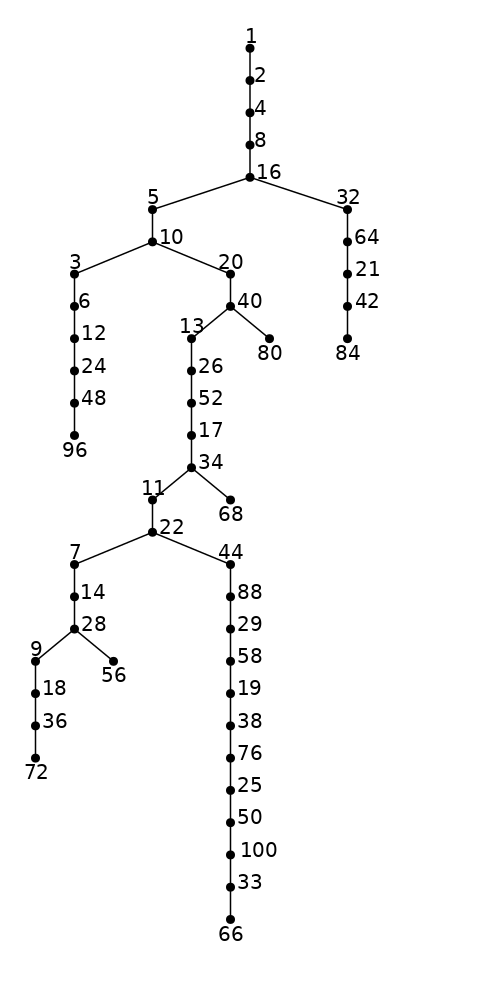 Our goal now is to make this a bit more visually appealing. We want to draw the root node at the bottom and depending on whether we came from the division by 2 step or the multiply by 3 and add one step we either go a bit in the clockwise or a bit in the counter clockwise direction.

The interesting part is now that at 20 and 3 we would have another one of this clock which are not with 12o'clock point directly upwards though. Rather into the direction of 10o'clock or 8o'clock from the previous number 10.

It's a bit similar to inverse kinematics where the previous angles of a segment determine the overall direction of the current angle.

I'm struggling with explaining the concept I guess so let me draw something. 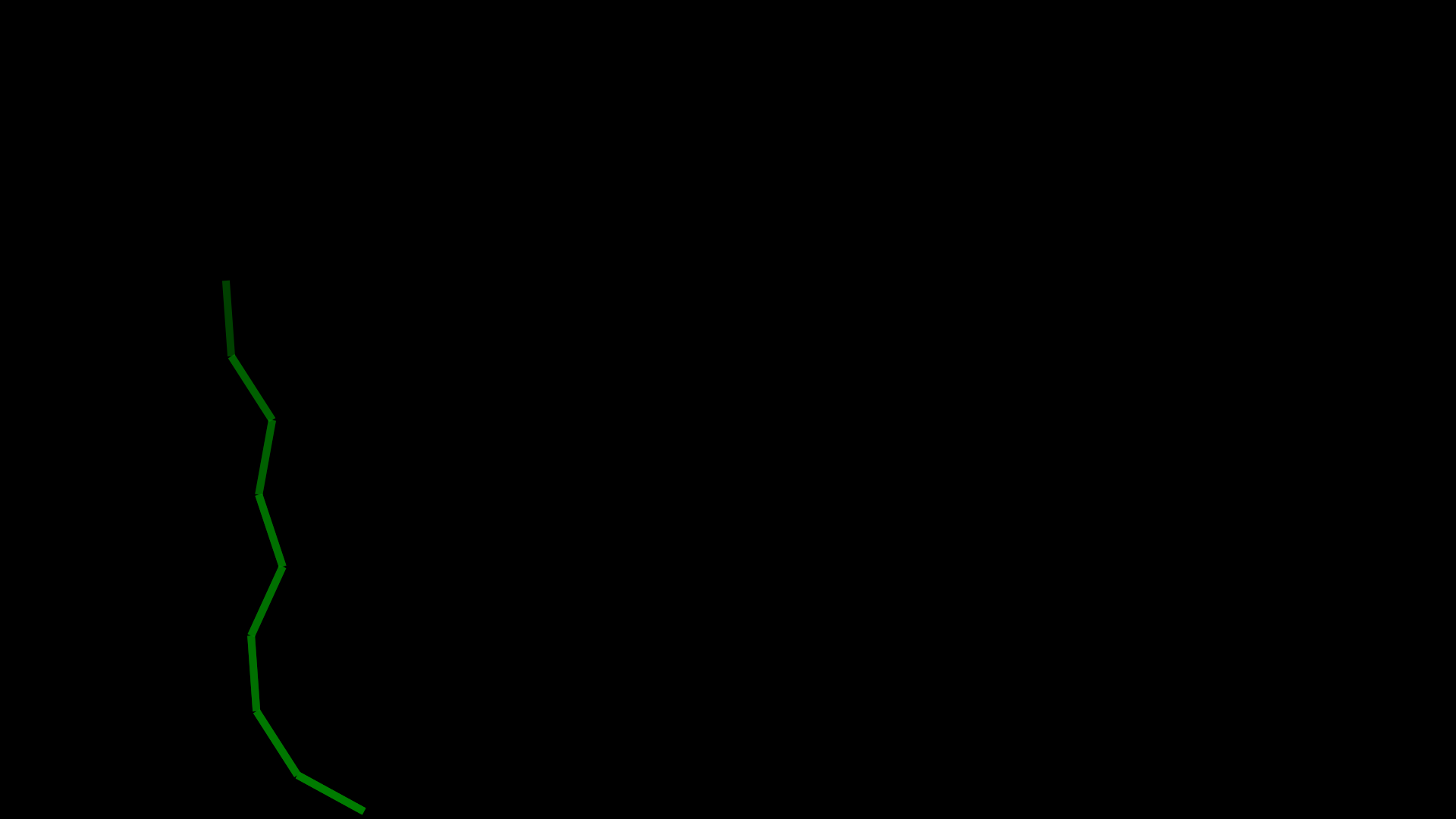 At the very bottom you have 1 then from there it goes a bit left and clockwise to 2 now to 4 is already going more up then left to 8 it's mostly up and for 16 it already goes right.

Let me get into the code for this now. It's mostly doing rotate which rotates the canvas in such a way that we don't have to compute the addition of angles ourselves.

That might look a bit complex at the beginning but it isn't actually. Let's walk through it step by step. Maybe I'll start with explaining all the arguments:

Then we use @JShape as described in previous posts. Set our general settings of opacity and linewidth I've also set the color here, which we'll later change a bit for a more beautiful animation.

Then we loop over all the numbers we want to visualize and create a @layer for each as we rotate and translate the canvas which should only have an effect on the current number.

Afterwards we get the collatz path and move along it in the reversed direction starting with the number 2 (as we always come from 2 to 1) Then we check whether the number is even or odd and rotate the canvas accordingly. We draw a line to the left in the rotated angle and translate to that new position.

A bit of a harder part I struggled with was to find reasonable angles and length of the segment to create a stunning algae I had seen before.

However for this it's kind of reasonable to just animate between the different values and then pick one you like.

This is with the following code before render :

You can see that I choose -1.5 as the multiplier here. And the angle starts at 0.5 and goes to 0.1. Based on the animation we can see that closer to 0.1 looks more like a tree structure and the length of the segment is way too long.

Going only from 0.2 to 0.1 with the angle looks much better (actually the one before looks also interesting but not what I had envisioned). Additionally I decreased the length of each segment to 3.1.

Now it's time for you to play around a bit with changing the colors and the width of each segment yourself.

This is one of the best that I came up with:

I hope you enjoyed the visualizations and are inspired to play around with it yourself. Let me know what you are able to create with it on Twitter @opensourcesblog.

And don't forget to sign up for the email newsletter 😉

Thanks to my 12 patrons!

Rotate workspace by a radians clockwise (from positive x-axis to positive y-axis).

Macro that creates a user-defined shape based on Luxor instructions within its begin...end block

In this example, the arguments after the end (i.e. action = :stroke color = "red" radius = 8) can be used inside the begin...end block and animated using the change action.

Renders all previously defined Object drawings to the user-defined Video as a gif or mp4.

Streaming to Twitch or other platforms are not yet supported.

takes as argument frame_image, frame, frames, useful to apply a postprocessing e.g. blur to all or some of the images. By default it is the identity and nothing happens.

where elements are a subset of the number of frames. Useful to reorder the frames, e.g. reverse the video with postprocess_frames_flow=reverse. By default it is the identity and nothing happens.