My final steps during the competition

Before I go over the optimal solution, which I only found because I read what other teams did after the competition ended, I want to go briefly over the things I didn't talk about in my last two posts about the challenge:

There is not much more to add to the swapping part from the last post besides some things I encountered. In the following a,b,c are family ids and A,B,C are the days they currently visit the workshop.

Let's move from swapping to the MIP approach. Last time I mentioned a way to find the optimal arrangement if we know how many people visit the workshop per day.

Which we normally don't know :D Therefore that was quite pointless. We want to get the optimal solution without knowing how many people are visiting each day which is much harder. Therefore we need to change the objective function to take the accounting costs into consideration. This is normally not really possible as the accounting costs are not linear but we can linearize them by precomputing all combinations beforehand which means the basically the graph I showed last time: 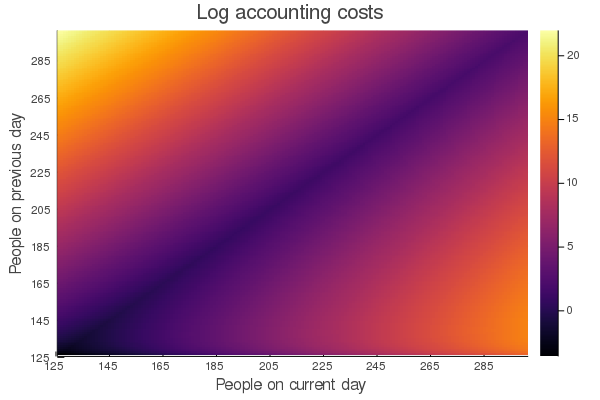 I tried to work with the number of people on the current day and the difference to the next day but this doesn't make anything easier but more complicated and I wasn't able to achieve good results with it in the end. I'm still not completely sure why this was worse than the approach I used afterwards but okay... So what did I use? Pretty much just what was published in the discussion forum.

That means in a bit of julia code (leaving some things out for simplicity):

First I defined some constants for easily changing minimum and maximum occupancy for other challenges or whatever :D

which just looks ugly the way it is there but when we check the LaTeX version of it:

The first part (before the +) we have our preference costs and afterwards our accounting costs. Assuming that we filled \(\mathrm{pc}\) and \(\mathrm{ac}\) in a reasonable way ;)

Note
I use the sum from 125 to 300 here because it's easier to read than my weird index shifting ;)

This means whenever we fix a family to a special day we have to pay the preference costs. If we fix one \(N\) variable we can look up the costs given the number of people visiting this day and the previous day. (Day +1 but we count backwards)

Then we have to care about our constraints next: Starting with easy ones:

There we just make sure that we don't assign a family to various days or have more than one accounting cost for one day.

which is again hard to read so we write it down in LaTeX:

where \(n_f\) describes the number of people in family \(f\) which is fixed. I think that constraint is a bit weird at first for some people who don't with MIPs all day. You might ask why don't we use integer variables for the occupancy and the just check whether they fit with our x variables? Multiplying here by \(i\) is a bit strange. The thing is we can work easier with binary indicator variables for the objective function. Wait! Why don't we make everything super easy and have the objective function like sum over \(ac_{N_d, N_{d+1}}\) so we use the variables as indices to obtain the value. Seems easy! The problem is that the solver doesn't work with integers but with real values instead and then the index would be a real value and everything would fall apart. Well if JuMP would allow this in the first place and the solver later on as well :D

and then we can come to our last constraint:

This is not really needed but makes the solving faster. What it does is it forces that if we fix N_{150,150,10} = 1 then the previous day actually needs an occupancy of 150 as well.

How far did I get with this approach? Well first of all I wasn't able to find the optimal solution which means it didn't finish (well I canceled it before). Therefore I had to result. This is stupid which I realized after some hours :D therefore I saved every result in between which can be done when using the master branch of JuMP:

because this enables to use callbacks which can be used with:

This calls the function new_integer_sol whenever a lazy constraint might be reasonable to add which is always reasonable when a new incumbent was found.

The function itself can then use something along this lines:

Then we are good to go. Additionally one needs to setup the JuMP model in direct mode:

It is also important to set the MIPGap to 0.0 to actually get the optimum as otherwise the default is something like 1e-4 I believe.

With this solution I obtained after even running it for 4 days straight on my machine only the deep local optimum just short of a bit more than 20$ from the global optimum. 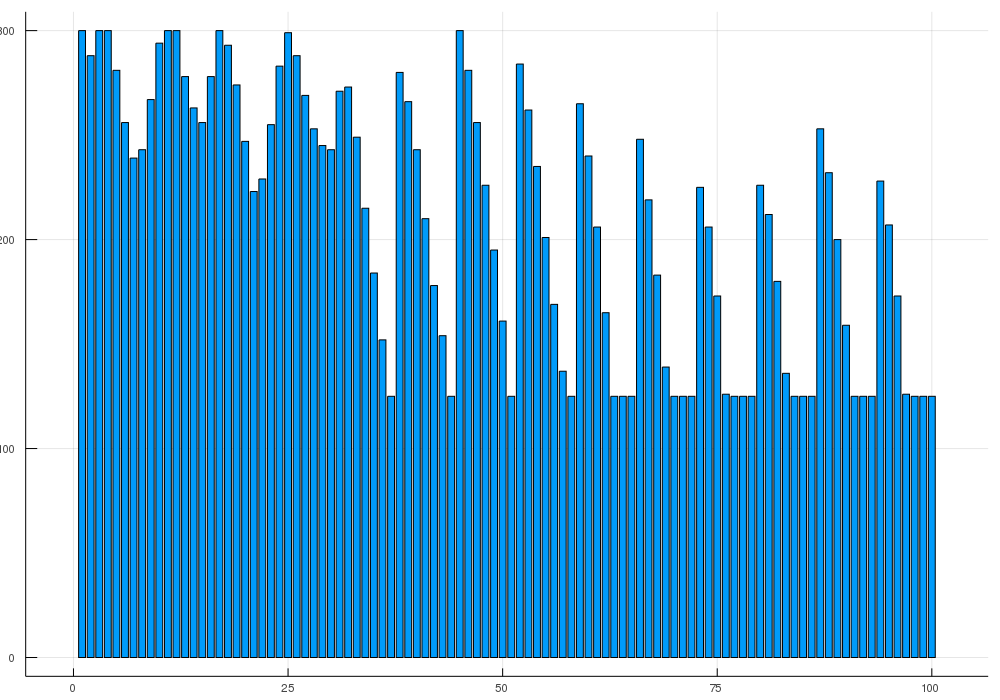 I played with some setting of Gurobi next: See all

Well I really wanted the optimal solution and others proved already that it is optimal so I don't have to. This all didn't work out as planned.

In the end I was glad that I still ranked 51/1620 and got my third silver medal.

Then shortly after the challenge people posted how they got there.

Some mentions first from the discussions forum that I found especially interesting:

So how to obtain the optimal solution given what we currently have. Actually there are only three small changes I did.

I think the first is simple. A bit more to the second point:

We can assume that we probably don't pay any family a helicopter ride because it is just super expensive so I've assumed that we don't pay more than 500$ per family by setting those x values to 0. That of course means that we can't prove optimality with this approach but don't worry we will later.

The third point is the most interesting I think and makes only sense if we roughly know how Gurobi works and I mean very very rough. Every MIP solver has this component or branch and bound which means that we solve as if every variable can be a floating point number and later we create a tree structure. If a variable x currently has a value 2.4 but should be integer we create two new models one where we add the constraint:

This means that we remove the current solution but no real integer solution. Then we use some heuristics and cool tools to go down one of those paths (we might use the other one later). The key point is that with about 3 million binary variables we have a lot of variables to choose from but each step we only make a tiny choice. Therefore we can add a variable which doesn't represent new information but instead just helps with this branching. Meaning we use the new occupancy variable which is integer and has bounds 125 and 300. Then branching on such a variable cuts the tree in a half where on day 5 for example we have either \(\leq 200\) people or \(\geq 201\) people which is a bigger choice then saying we have exactly 200 people on day 89 and 214 on day 90 before christmas on the one hand or not on the other because fixing it to 0 still leaves sooo many options.

Now after finding the optimal solution I was able to set it as my start point and then remove the 500$ per family constraint and run it again. Then after another 21 hours I (I mean Gurobi) was able to prove optimality of that solution. 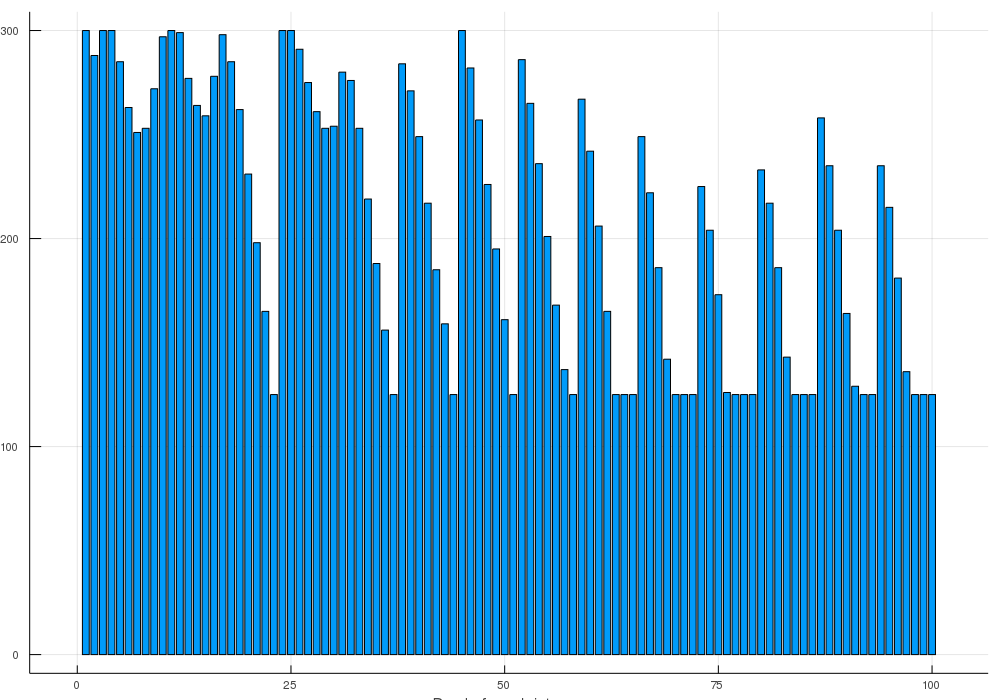 and you can see compared to the deep local minimum:

I hope you enjoyed reading this final post and hopefully we will compete at the end of this year again.

Currently I get 10$ per Month using Patreon and PayPal when I reach my next goal of 50$ per month I'll create a faster blog which will also have a better layout: