I came across the following YouTube video by Numberphile today:

It is about multiplicative persistence which means roughly the following. We take an integer and multiply the digits together to get a new number. This will be done in a loop until we get a single digit number. Example: 3279->378->168->48->32->6. The persistence of 3279 is 5 as it takes 5 steps.

You can find the list in the on-line encyclopedia of integer sequences oeis.

Mathematicians think that there is no number with a higher multiplicative persistence than 11. They tested it with all reasonable numbers up to over 230 digits.

Anyway I wanted to give it a try. In the video Matt Parker writes some code as well to get the persistence of a number in Python. I used Julia ;)

Matt used recursion which would look like this in Julia:

**More elegant solution: ** (mentioned by Jolle in the comment section)

Then you don't need the steps parameter and it is very easy to read.

Yes digits and prod are standard functions in Julia.

We can easily test the performance when we use BenchmarkTools

and we know that we probably don't get in trouble with too many recursive calls as our expected limit is a persistence of 11 but it is also not really necessary and can be avoided by using:

which has a similar performance.

now we have a problem that currently we are dealing with normal integers which doesn't work if we actually want to deal with large numbers (like 230 digits...).

We have to change prod(digits(x)) to prod(convert.(BigInt,digits(x))) in both functions. This increases the runtime to \(\approx 18 \mu s\)

We can try it with a very big number:

Let's generate some numbers and compute their persistence.

We call the function function create_list_simple(;longest=15) and start with this code. BTW: longest means the maximum number of digits we want to create.

My idea was to create numbers in this form like normal counting in our n array structure. So we first have 9 then 99 and so on until we have 15 of them then we get to 8,89,899 etc. This implies that we don't create our numbers in an ascending order.

The arr2x function creates the actual number out of our array:

after closing the while loop we can print how much time it took:

Can we do better?

If we increase the number of digits in a number we have to do a lot of \(9^x\) calculations. My idea was to precompute those numbers.

Now we create our n structure back from a number and calculate the next number using that structure.

If we use this function instead we can calculate all reasonable numbers in about 300s.

In general there are options to further reduce the search space. ;)

I also created a small visualization of the persistence of the numbers up to 100. 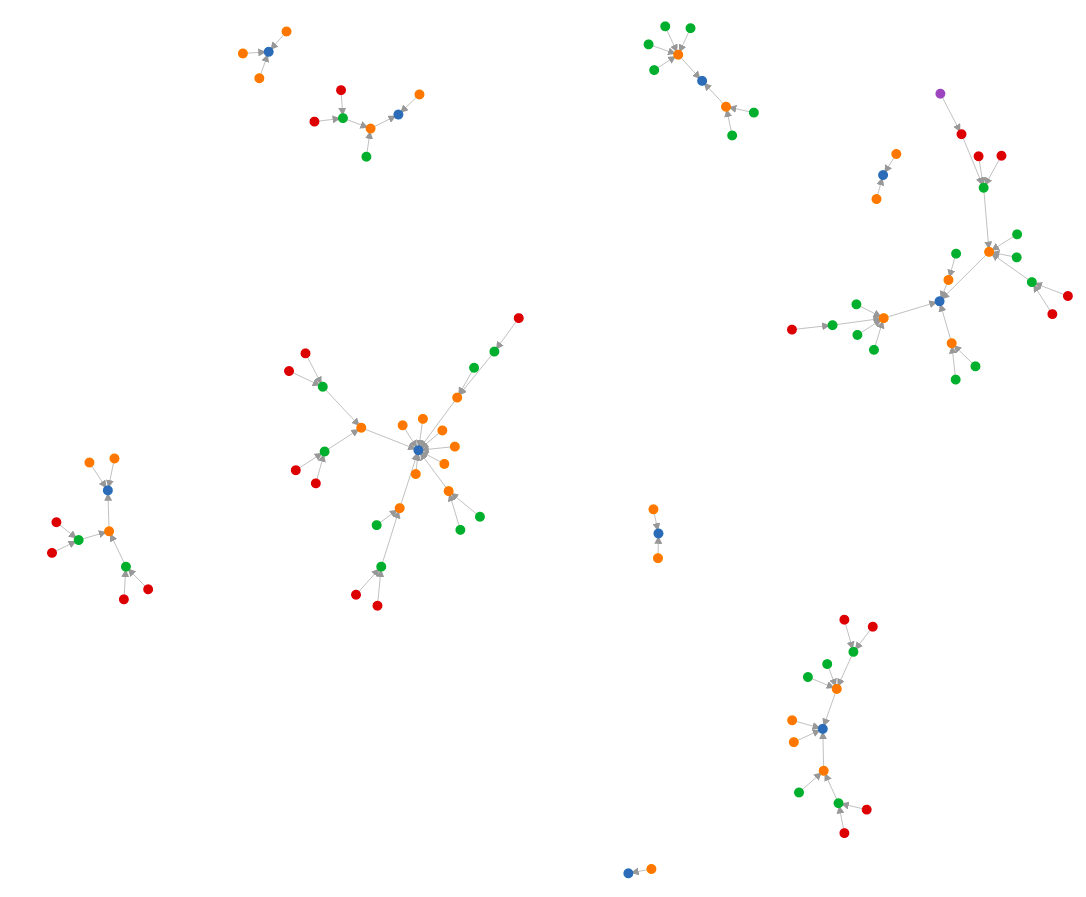 I thought about this again after published it and improved the style and performance of the code. Additionally I created some more visualizations.

Problems with the version I explained above about creating a list of numbers is that it doesn't generate them in ascending order. Like 666677777788888 before 277777788888899 for this I actually got rid of the n structure and created a list in a different way. This might be not the best way according to what I saw on Twitter but I think it's alright. The thing that is changing is inside the while True loop. We initialize a variable x=BigInt(1) before which represents the number we want to test.

For this I removed the checks whether it is reasonable so it creates 222 as well even if it can be reduced to 8. These kind of checks are now generalized in my code in the cache part.

Later we use this to jump to the next useable number:

With this improved code we can check the numbers with up to 40 digits in \(\approx 60s\) which is 5 times faster than the 300s we had before.

I read somewhere that it would be nice to have a histogram as well so I plotted it: 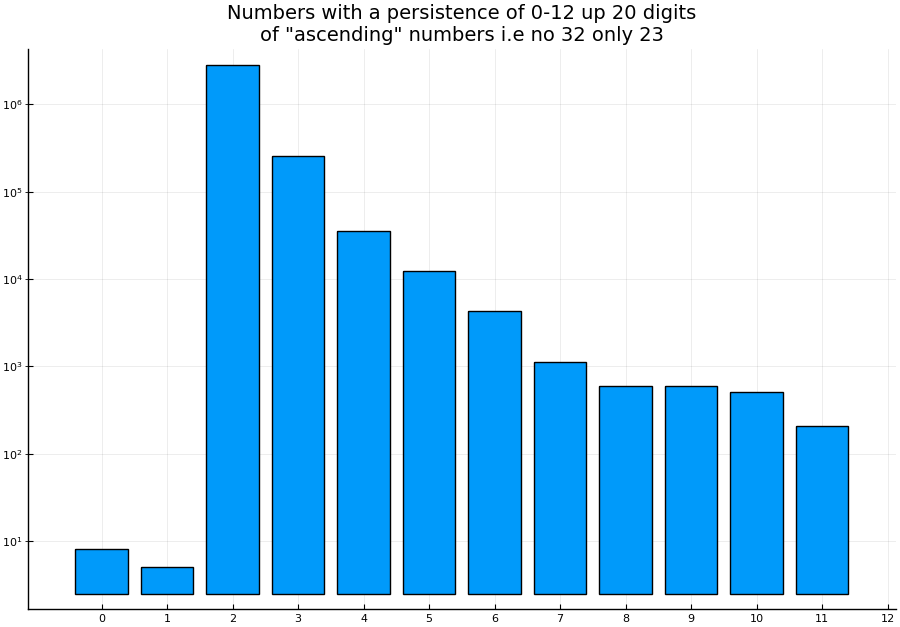 the next one shows the histogram with up to 20 digits as well but uses the filtering step. 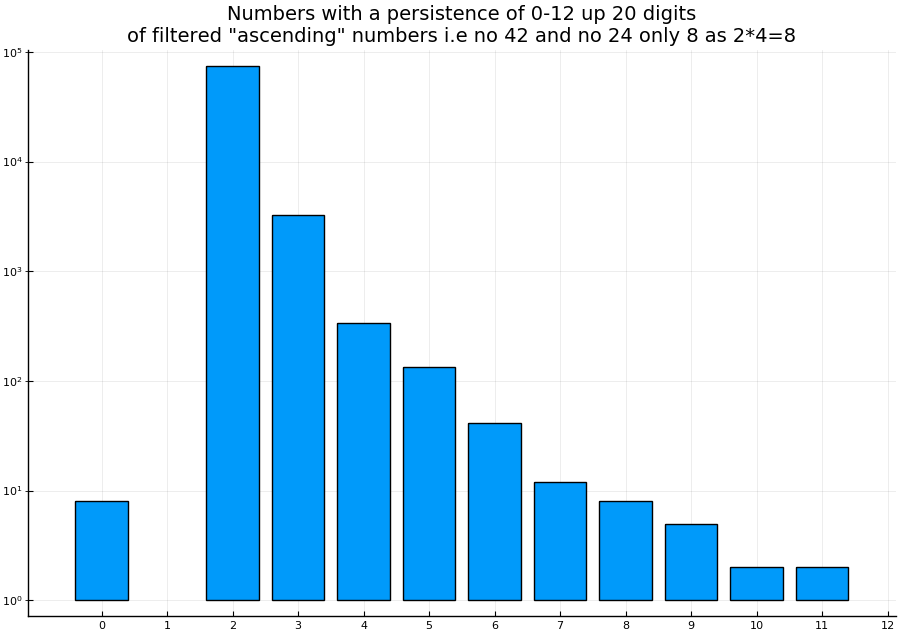 There is another performance update again mentioned by Jolle in the comment section below. Creating unnecessary arrays is quite bad and I was just too lazy by using the default function digits.

Instead using this function:

Which takes a number x of some kind of type integer and then computes the digits itself by dividing it by 10 and then taking the remainder and continue with the rest. This doesn't create arrays each time and is therefore quite a bit faster. Running my test again with all reasonable numbers up to 40 digits it takes now \(\approx 25\)s instead of 60s. It also doesn't really matter whether we use the more complicated cache version or the simple while version then.

There are some other people who saw the video on Numberphile and programmed their own version. They specialized more on performance and on interesting ideas how to reduce the search space. Please have a look at the code by Amit Moryossef on pastebin who is also trying to prove that there is no number with a persistence of 12. I'll definitely keep you updated on that. Additionally please check out the code by Davipb which is written in C. He mentioned on Reddit that he checked it up to 400 digits.

Edit 31.03.2019 If you're interested about the newest code projects and findings you might wanna check /r/numberphile. There I found this database of numbers with a persistence of >2 up to a huge amount of digits Multiplcative persistence DB

The code for the visualization with d3 as well as the Julia code is on my GitHub.

I'll keep you updated if there are any news on persistence on Twitter OpenSourcES as well as my more personal one: Twitter Wikunia_de